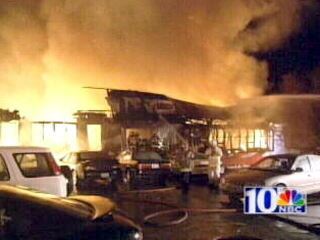 However, statistics also show that when a fire does erupt in a public building, a large number of deaths occur. It is the history of such tragic fires that have provided the framework for the codes that are enforced today. (Photo shows the fire at the Station nightclub in 2003 in West Warwick, R.I., that killed 100 people. The building was found to have numerous safety violations.)

Statistics show that 80% of all businesses that have sustained a substantial fire are unable to reopen and go out of business.

The City of Beaufort Fire Department maintains an aggressive fire inspection program of its public buildings.

Our main focus and mission is to work closely with our business owners to ensure that their business and their employees, and the thousands of patrons who frequent them every year, enjoy themselves and remain safe.